Please see photos of Derbyshire players who did well at the above event. 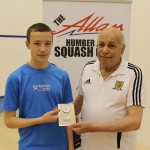 There is James Blythe who came runner-up in the Boys U19, losing out in a closely fought contest to Connor Sheen of Merseyside. Like James, Connor is another highly ranked U17 player and they were both playing up an age group. James is receiving his trophy from Steve Forster who is chairman of Humber Junior Squash Academy. Having just come back from 6 months out with injury, James played some fantastic squash to get to the final and his achievement in getting there just underlines his commitment to becoming a top class player. 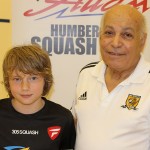 Oliver is pictured with Dr. Assem Allam, who as we know has committed to sponsor the Allam British Open Squash Championships for the next two years and has moved it to his fantastic venue in Hull. Ollie finished as runner-up in the Boys U13 event, losing the final to his current nemesis Adam Goad. Adam is coached at Carlisle by Paul Bell (Irish Junior National Coach) and is himself a fantastic prospect. Only just into the U13 age group, Oliver has had a fifth place, two third places and competed in two finals already, of which he has won one. He has also successfully qualified for the monrad stages of both Silver events he has played as an U13, which is a substantial achievement in itself. 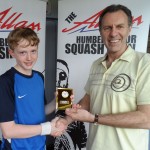 There is also Joe Thomas, a regular tournament competitor and yet another up and coming Brampton Manor player, receiving his Boys U15 plate winner trophy from Steve Forster. Joe’s event featured many players significantly higher than him in the rankings and his plate win represents a significant step in his development in the U15 age group and can only serve to give him added impetus towards his improvement as a player. 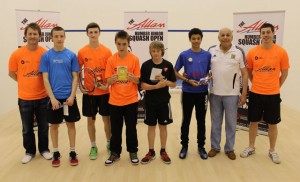