On Sunday 14th October, the first stage of the U15 girls’ inter-county squash championship was held at the Hull and East Riding Squash Club, the host county being Yorkshire. With Lincolnshire dropping out it was just a single tie between Derbyshire and Yorkshire.

Derbyshire were represented by Laura Jones, Jordan Mellor, and Gabrielle Barton from Brampton Manor squash club, and Molly Tomlinson and Francesca Sulley from Duffield squash club. This was the first outing for the team and also the first time they had played at U15 level, and for Jordan it was her first match playing for her county.

We always knew it was going to be a tough tie against a very experienced and talented Yorkshire team, and so it proved. But, the girls did everything that was asked of them, fighting for every point and each of them playing their best squash. Although we didn’t end up winning many games (Gabrielle winning the first game of her match most convincingly 11/4), the girls competed. The Yorkshire captain made a point to commend the girls’ performance at the end of the competition, I quote, ‘The girls were a real credit to Derbyshire and certainly gave our girls a game.’

On Sunday 7th October, the first stage of the U13 girls’ inter-county squash championship was held at Duffield Squash club. The three teams competing were: Lincolnshire, North Wales and Derbyshire. Although we knew the Lincolnshire players from previous encounters, North Wales were an unknown quantity. Derbyshire were represented by Gabrielle Barton from Brampton Manor squash club playing at number one, Rebekah King from Sutton – a real catch for Derbyshire as she had the option of playing for either Nottinghamshire or Derbyshire, and a player with bags of potential – playing at number two, and Elizabeth Wall and Libby Leivers, both from Brampton Manor, taking it in turns to play at third string. This was the first outing for this team, three out of the four players representing Derbyshire for the first time.

First up was Lincolnshire, probably the favourites at the outset, fielding a very strong team with the number one and two in the East Midlands regional squad.  But, both Gabrielle and Rebekah weren’t daunted by the task ahead of them, and although they went down 3/0 in both matches, they competed; Gabrielle increasing her points score in each subsequent game against a player ranked 6th in the UK, and Rebekah’s highlight – taking the East Midlands Regional Champion to 11/9 in one game. Elizabeth showed no nerves what-so-ever in her first county match. She exhibited maturity and composure far beyond her age of eleven, playing great squash to beat the Lincolnshire player 11/1, 11/1, 11/3, what a way to start your county squash career!

After lunch came the Welsh. The Derbyshire girls were awesome, winning all of their matches to take the tie 3/0 and attain the runners-up position in the tournament behind Lincolnshire. Gabrielle’s games went 11/5, 11/4, and then a shudder when the Welsh girl found inspiration from somewhere to win the third game 11/5, but Gabrielle recovered to take the fourth convincingly at 11/6. Rebekah played some super squash in her game against the Welsh number two; she dominated from the outset taking the match 11/1, 11/4, 11/1. And then, last, but by no means least – Libby Leivers – a real asset to any team with her skilful play and ever enthusiastic nature.  Libby went on court like she was born to play for her county, comprehensively winning her match 11/2, 11/4, 11/4. What a fantastic achievement for a player aged only nine! Well done girls, you did Derbyshire proud! 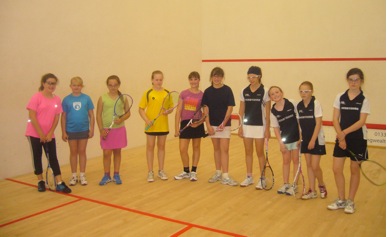 In March, the counties of Suffolk, Cumbria and North Hants descended on the village of Duffield to do battle for the under-13 girls inter-county trophy. Cumbria and Suffolk were considered the hot favourites for the title having topped their groups in the previous round of matches, Derbyshire and North Hants being the respective runners-up.

It was a fabulous day of squash! It was what team squash is all about, an electric, competitive atmosphere with super team-spirit being exhibited by all the players.

Cumbria got off to a flying start defeating our girls 3 matches to luv, but our girls really made them fight for their victory. We have met Cumbria three times this season and they have beaten us every time, but, there is definitely hope for the future, we all know we aren’t too far off them. Cumbria then maintained that high level of performance throughout the day to defeat Suffolk and North Hants and emerge as champions.But, our Derbyshire girls didn’t let that first tie defeat get them down, on the contrary, they showed great strength of character, re-focussed and came out even more determined for the second and third ties.

Molly, at number one, had some real battles on her hands, but she showed great spirit, led by example, and made her opponents fight for every point.

Francesca really came out fired-up for her next matches having lost to the Cumbrian – Katie Twentyman, a player she’d beaten in their last encounter. She won her next matches against Suffolk and North Hants without dropping a single game!

Gabrielle played some lovely squash to beat her opponents. Of particular note was her encounter with the Suffolk player – Hannah Moussa. Gabrielle narrowly lost the first game, but then came back on court to win the next three matches most convincingly: 11/3, 11/6, 11/2.

As the ties were played out in the afternoon, it became a very tight competition between Derbyshire and a strong Suffolk side, fielding the number three in the country, as to which team would claim the runners-up position. In the end our Derbyshire girls triumphed, claiming the runners-up trophy in only their first season as a team!

This was the second outing for the girls as a team, and, following on from Gabrielle’s match win in the first stage, we were hopeful of further victories, particularly considering that we had the home advantage and had Curtis Tomlinson—county squad coach—on hand to offer the girls advice during their matches.

The girls really looked a team, and so intimidating, proudly sporting their new Derbyshire kit kindly provided by pdhsports.com of Duffield.First up was Cumbria, a team we had played and lost to in the first stage. Molly was up against the experienced Rachel Tang yet again, and although she didn’t win her match, she increased her points tally in each game considerably from last time. Molly competed well in the first game just losing out 11-8, and then, after gaining some valuable advice from Curtis during the interval, Molly got off to a flying start volleying the ball when the opportunity arose and quickly established a 10-4 lead only to see her opponent stage a remarkable comeback and take the next 8 points and the game 12-10. Molly again came out looking the sharper for the third game and led for the first few points and chased every ball, but once again her opponent leveled and went on to win the game and take the match 3-0.

Francesca, coached by Paul Hargrave of pdhsports.com, faced Katie Twentyman, a player she had twice played before, once in an open tournament and then in the first county stage, and had lost both times. It was to be third time lucky for Francesca, Francesca clocking up her first county match win. But really luck had nothing to do with it; Francesca just played some lovely squash to seize victory. Francesca and Katie are both similar players, both having excellent short games, and so, with them cancelling each other out at the front of the court, and although Francesca never really got her serve going, usually worth a good few points per game to her, it was to be Francesca’s clinical forehand and backhand drives that told. Francesca held her nerve to take the first game 13-11, comfortably took the second 11-6, but was then tested in the third when Katie staged a comeback to take the game 6-11. For the last game Francesca re-focused, came out determined, and always led to win 11-8.

Gabrielle was playing Rhianne O’Neil, the opponent she’d dispatched in the first round to claim Derbyshire girls’ first match win in ages! It was fairly obvious from the start that the Cumbrian was determined to get her revenge for her first round loss, making it extremely difficult for Gabrielle to settle into any kind of rhythm; Gabrielle went down in the first two games 7-11, 5-11. Gabrielle fought back bravely and nearly took the third game, but narrowly lost 11-13 to lose the match 3-0.

So, in the end Derbyshire had lost the first tie to Cumbria, but we all took comfort from the fact that the team as a whole had certainly improved its performance since the last time we’d played them.

Next came Lancashire. First up was Molly against the Lancastrian number 1—Amie Comer. As predicted after the first stage, we all knew it wouldn’t be long before Molly took her first number one scalp, and, unfortunately for Amie, it was to be her. Although Molly lost the second game, she always looked determined to win and took the match 11-9, 6-11, 11-8, 11-7.

Francesca was then next on. Buoyed by her first county win in the first tie and then at last getting her serve going in the second and third games, which her opponent found difficult to handle, Francesca took the match 11-7, 11-1, 11-3.

It was then that the girls’ achievements sunk in. It was the first time in over five years that a Derbyshire U13 girls’ team had won a tie! What an achievement! Well done girls!

John Sulley—team manager—said, ‘We are really pleased for the girls. In the two county stages each one of them has had some success. Firstly Gabrielle winning the first match for Derbyshire in over five years, Molly taking her first number one scalp, and Francesca winning her first county match. Then as a collective, winning the first tie for Derbyshire girls for ages! We are really pleased how this team is shaping up. They are starting to hold their own now and yet still have bags of development potential. We are very lucky that the team has strength in depth, each one of them being a very good player. What is also so pleasing to see is the great team spirit. We just can’t wait for next season to come around! A lot of people need to be thanked for getting them to where they are. A lot of credit needs to be given to their individual coaches at Duffield and Brampton Manor, Curtis Tomlinson for putting them through their paces at county squad training sessions, Carol Wood—Derbyshire Development Officer—for her passion to get Derbyshire girls back on the map, and Helen Wilson at Brampton Manor for organising the Derbyshire Grand Prix—the feeders to the county squads—which give them invaluable match practice.’

Carol Wood added, ‘These girls are leading the renaissance in Derbyshire girls squash. What is also exiting for the future is that we have another crop of girls coming behind them, the likes of Elizabeth Wall, Libby Leivers, and Hannah Hicken, two of them already holding high national rankings. We still have a lot of work to do to compete with the likes of Yorkshire that can field not just one exceptionally strong team, but two, but we are making progress.’ Carol is always on the lookout for any Derbyshire girls that are interested in taking up the sport, so please get in touch with her (07887 837359 or pc.wood@btinternet.com) if you are interested in playing squash, particularly at county level.