Click on link for England Squash Inter County Calendar for 2016-17 and click on links for divisions and fixtures for stage 1 (all age groups squash and racketball). 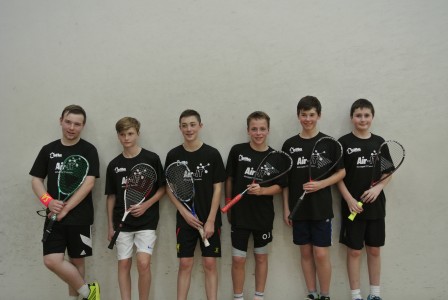 It was a great day out and very successful as we finished second behind an extremely talented 5 from Yorkshire. It was no disgrace losing 5-0 to a team who’s top 3 players are currently  4,5 and 6 in ESR rankings. Their 4th string also won the Derbyshire Junior open U13 last year and is also ranked higher than any of our players and it was Harry who almost caused an upset against him pushing him all the way in a brilliant  first game. I’m sure all the boys gained some valuable experience playing against such a strong team.

But full credit to all the players as next up was the host County – Durham. First on was 3rd string Matt who started like a train and didn’t take his foot off in a great 3-0 victory which seemed to set the tone for the next two ties with Joe at 5 repeating the same score line, hardly giving his opponent a chance of serving and then Harry, at 4 easing into a 2-0 lead before being pulled back to 2-1 but then he seemed to go up a gear and quickly dispatch his opponent in the 4th game making it a comfortable 3-1 win and sealing the match. Next up was O J who at 1, had a much tougher opponent to deal with as he was over 1.5 years older and 81 ESR ranking places above Ollie. A big ask but OJ battled to the last point but alas went down 3-0. ( next time OJ …next time !!). The final match saw Michael take on another highly ranked opponent who is currently 47 ESR ranking places higher. Michael went into a 1-0 lead against his opponent who seemed to be struggling with a leg strain. But Michael did very well not to let his opponents injury related outburst distract him from the job in hand and quickly doubled his lead. His opponent realised that he was not going to get past Michael and decided to ‘ retire injured’ at the start of the 3rd game.

So a terrific 4-1 victory over Durham, putting Derbyshire into 2nd place overall. A great result with two team members making their County debuts and Alex getting some valuable match experience against 3 different opponents from the other two Counties. 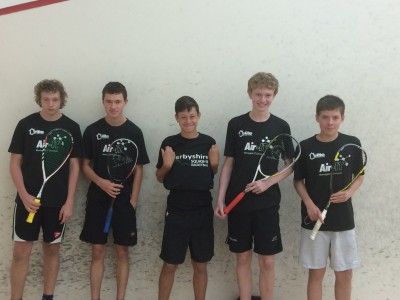 With Yorkshire in the draw we travelled to Cheshire knowing that it was one team from three who would move into the top section of Stage 2 of the competition. And it was Yorkshire that we faced first of all! A team that boasts internationals and Silver tournament winners in their top 3 and s 4th string capable of beating any of the other players on show that day we knew it was always going to be tough. Against such opposition the best you can ask for is ensure that every Yorkshire player knew they had had to earn their victory. We got the bonus of a win in the first game as Kieran beat Yorkshire’s development player, Theo James, 3-0 – 12/10, 11-3, 11/7. Indeed Kieran was the only player to take a game in this first match but, as previously mentioned, all games were hard fought and ‘small margins’ in terms of experience, and more significantly game nouse, saw Yorkshire win the other four matches 3-0 (Oli Lowe v Nick Wall, Joe Thomas v Elliott Ridge, Joe Harrison v Ben Merchant and Oli Hall v Joseph Twigge).

Pride in their performance helped the lads move on and look forward to the remaining fixtures which we hoped were to be more lucrative. Any disappointments were soon wiped out as all the players enjoyed a close, and amusing, game of junior football taking place outside.

It was after lunch that the real work began and Cheshire, the hosts, were next up.

Slight confusion and eagerness from players saw Kieran battle hard, but ultimately lose to his opponent (James Woods) though this eventually was a meaningless rubber as, due to an injury at number 4, the two players should not have played so Kiean was awarded a walkover. James then, after a small recovery, then went on to play Oli Hall in what was possibly the toughest game of the round with Oli eventually losing 3-1 (11/6, 11/7, 6/11, 12/10). Oli Lowe battled hard against experienced Richard Hall and narrowly lost each of the three games (11/7, 11/8, 11/9). Joe Harrison had an equally close encounter against his opponent Gabe Fallows but was able to secure a 3-0 win (13/11, 11/7, 11/9). With the match at 2-2 it was left to 2nd string Joe Thomas to ensure we had something to play for against Lincolnshire. After going 2-0 up (11/6, 11/1) his opponent, George Keeble, started game three in determined mood and, helped a little by extremely aggressive play and a few favourable calls, he levelled the game (4/11, 9/11). All to play for in game five but a more confident and assured final game saw Joe ease past George 11/5.

Though slightly disappointed in not going through we can be nothing but proud of the way the team played with sportsmanship, manners and no lack of effort! Better luck next time!!

On Saturday 10th October, the first stage of the U17 girls’ inter-county squash championship was held at the Tynemouth Squash Club in Newcastle. The counties competing were: Cumbria, Yorkshire, Northumbria and Derbyshire.

Derbyshire were represented by Laura Jones, Gabrielle Barton and Isabelle Kenworthy from Princes Club, Chesterfield, and Francesca Sulley from Duffield.

This was always going to be an extremely difficult stage with the other teams fielding high ranking players, some of them representing England. Although the team didn’t manage to win a tie, as usual the girls were a credit to Derbyshire, with them keeping going against very tough competition and showing super team spirit. The tournament organiser commented: ‘Each players conduct on court was a credit to the sport and to Derbyshire’.